We are living in the Beginning of a Military Police State.

Watch/Look at these FACTS of innocent citizens being beaten and killed by the poLICE >   https://www.youtube.com/watch?v=jC4k5PuD6GE

Social media platforms that once facilitated the free exchange of ideas and information are now actively seeking to silence and censor conservative opinions.

This new Orwellian impulse that is taking over Big Tech is particularly problematic because social media websites, which are supposed to be safe spaces for all free speech, get special legal perks.

Under Section 230 of the Communications Decency Act, websites such as Facebook and Twitter are not treated as publishers of “information provided by another” — which would subject them to libel laws and other headaches publishers have to deal with — because they “offer a forum for a true diversity of political discourse.”

This means social media platforms are not merely private companies who can censor whomever they wish — They are considered, by law, to be public forums that allow free and open debate.

Yet, they’re doing the exact opposite. They are stifling online speech, warping the national discourse, and obstructing the free flow of ideas. Big Tech is not just biased against conservatives — it is actively trying to silence them and deprive them of online platforms.

Big Tech’s bias was on full display recently when conservative activist Candace Owens was suspended from Twitter for satirical tweets mimicking the racist, anti-white tweets of New York Times editorial board member Sarah Jeong — who has never been suspended from Twitter despite a history of racist comments. …

Facebook is infamous for its lopsided application of its “community standards.” Conservative content is regularly removed from the site while vile, often violent, radical left-wing content is left alone. …

A study found that while liberal publishers saw a roughly 2 percent increase in web traffic from Facebook following the algorithm changes, conservative ones saw a loss of traffic averaging around 14 percent.

Unfortunately, it doesn’t look like Big Tech is set to return to its free speech roots anytime soon. 08/16/18 https://www.washingtonexaminer.com/opinion/op-eds/brad-parscale-big-tech-is-becoming-big-brother

The censorship and bias of ‘social media companies’ is becoming more and more prevalent.

FWIW, when I read Facebook’s ‘Community Standards’ before I found nothing about restriction of religious or conservative speech. But, perhaps they define words differently than I or the dictionary do.

As far as being Orwellian goes, in his book 1984, George Orwell describes a society that changes the definition of words as well as restricts freedom of expression. The book called that “newspeak.” Today, what is called “political correctness” is similar. 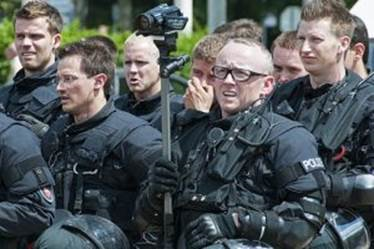 Notice that, too, is becoming accepted. Notice the following:

Unfortunately, it doesn’t take much for the American people to march in lockstep with the government’s dictates, even if it means submitting to martial law, having their homes searched, and being stripped of one’s constitutional rights at a moment’s notice.

In Charlottesville, most of the community fell in line, except for one gun-toting, disabled, 71-year-old war veteran who was arrested for purchasing cans of Arizona iced tea, a can of bug spray and razor blades, all of which were on the City’s list of temporarily prohibited, potentially “dangerous” items. Incidentally, the veteran’s guns (not among the list of prohibited items) caused no alarm.

This continual undermining of the rules that protect civil liberties will inevitably have far-reaching consequences on a populace that not only remains ignorant about their rights but is inclined to sacrifice their liberties for phantom promises of safety.

Be warned: these lockdowns are just a precursor to full-blown martial law.

The powers-that-be want us acclimated to the sights and sounds of a city-wide lockdown with tanks in the streets, military encampments in cities, Blackhawk helicopters and armed drones patrolling overhead.

They want us to accept the fact that in the American police state, we are all potentially guilty, all potential criminals, all suspects waiting to be accused of a crime.

without fear of being arrested, beaten, tazed or shot

for REMAINING SILENT which is our legal Right

and not answering questions about where we are headed, where did we come from

when we are pulled over for just having a license plate light out.]

They want us to be meek and submissive.

They want us to report on each other.

They want us to be grateful to the standing armies for their so-called protection.

They want us to self-censor our speech, self-limit our movements [because poLICE KILL 1,500+ citizens a year, and the poLICE “ARE” the terrorists. You are 8 times more likely to be killed by a cop than by a terrorist. The poLICE are worse than the Terrorists, and poLICE are worthless because they come only “after” a crime “after” you have been beaten or robbed, and then poLICE arrest the victim for not answering poLICE questions, and

As Glenn Greenwald notes in The Intercept:

“Americans are now so accustomed to seeing police officers decked in camouflage and Robocop-style costumes, riding in armored vehicles and carrying automatic weapons first introduced during the U.S. occupation of Baghdad, that it has become normalized… The dangers of domestic [poLICE] militarization are both numerous and manifest. To begin with… it degrades the mentality of police forces in virtually every negative way and subjects their targeted communities to rampant brutality and unaccountable abuse… Police militarization also poses grave and direct dangers to basic political liberties, including rights of free speech, press and assembly.”

Make no mistake: these are the hallmarks

Watch this for “PROOF” the poLICE ARE CRAZY CRIMINAL MANIACS> https://www.youtube.com/watch?v=jC4k5PuD6GE