3 HORNS in the NWO will be Uprooted/Invaded

They are all in the NWO but these 3 are torn out of it.

Subject: And as a bonus: Here is the setup of who makes it happen:

The Poop/Pope is the Antichrist guided by Satan.

1st (Religious) Beast is the POOP who is the 1st Beast from the EARTH.

And the POOP controls/Rides the Military Beast!

2nd (Military) Beast is the NWO as 1 World Army who is the 2nd Beast from the SEA comprised of:

The above Groups/troops come from 10 Regions (“not” 10 specific countries).

And the USA loses & is invaded!

Spain, France (but will be 1 of 3 HORNS ATTACKED) , Monaco, Italy, Malta, Slovenia, Croatia, Bosnia and Herzegovina,

Montenegro,Albania, Greece, Turkey, Cyprus, Syria, Lebanon, Israel (but will be attacked), Egypt, Libya, Tunisia, Algeria and Morocco=they will all be in the NWO, but remember 3 HORNS of the NWO are attacked/uprooted.

And he [THE 2ND Beast] [10 area Confederation (NOT just 10 Countries)=NWO-NATO, European Union etc.] exercises all the authority of the first POOP beast (the Earth beast) in his presence, and [the Second Beast] causes the earth and those who dwell in it to worship the first beast [THE POOP], whose deadly wound OF

February 15, 1798, when French troops entered Rome and their commander, General Berthier, deposed Pope Pius VI. 12 And he exerciseth all the power of the first beast before him, and [this Military Beast] causeth the earth and them which dwell therein to worship the first [Religious POOP] beast, whose deadly wound was healed. Revelations 13:12.

The Beast of the EARTH

Then I saw another beast [The POOP] coming up out of the earth, and

Back to Revelation 13:11: “I saw another [the false Religion Beast] beast coming out of the earth.”

And then in verse 12 it shows that this Military Beast FORCES everyone to worship the POOP the 1st Beast.

This means the STATE forces the POOP’S RELIGION ON EVERYONE.

Therefore it is a “WORLDWIDE” RELIGIOUS UNION between the FALSE CHURCH/POOP AND THE STATE.

This RELIGIOUS UNION therefore rises “out of the earth”, BECAUSE it encompasses the whole earth AS THE BEAST OF THE EARTH.

Now don’t be fooled by the terms “water” and “sea as if they mean the same thing:

But Sea and Waters in the Bible mean 2 different things:

The waters [Bible doesn’t say “sea” but says “waters” which in the Bible means Peoples] which you saw,        where the harlot [POOP] sits are peoples, multitudes, nations and tongues.

The “KEY” to understanding this is that Bible states harlot & sits.

“SITS” MEANS THE POOP rides/sits on the Beast”,

are peoples, multitudes, nations and tongues

This means the POOP CONTROLS (as a rider of the Beast), all the peoples of the Earth in. Revelation 17:15.

THE BEAST “uproots” 3 of its own heads!

Which means that even though Ephraim and Manasseh and Rueben ARE originally in the 10 Horn area of the Beast Power,

Ephraim and Manasseh and Rueben are overthrown out of the Beast Power.

That means the following Nations will be destroyed/invaded during the TRIBULATION:

Identities of the 12 Tribes of Israel “today”:

HERE IS where the 12 Tribes “are” TODAY

St Vincent and the

*Although also EU member states, citizens of Cyprus and Malta are eligible to be registered to vote in respect of all elections held in the UK.

Sovereign Base areas of Akrotiri and Dhekelia on Cyprus

Repeat of previous point to restore continuity to this dissertation:

“Every” Nation & Tribe will be in the NWO

The 3 uprooted are the USA, France, & The British Commonwealth

The Reason “WHY” the Catholic Church is the 1st Beast

The MARK of the Beast

Sunday...It is a law of the Catholic Church alone...

Thus the observance of Sunday by the Protestants is a homage they pay, in spite of themselves, to the authority of the (Catholic) Church.

The Catholic Church claims responsibility for the change from seventh-day to first-day Sabbath.

... a change for which there is no Scriptural authority. Catholic—Doctrinal Catechism 3rd Edition: 174

Here is an explanation from The Catechism of the Catholic Church Section 2 Article 3 (1994):

Sunday – fulfillment of the Sabbath. Sunday is expressly distinguished from the Sabbath which it follows chronologically every week; for Christians its ceremonial observance replaces that of the Sabbath...

In respecting religious liberty and the common good of all, Christians should seek recognition of Sundays and the Church’s holy days as legal holidays.

And here are various Catholic sources claiming the change was the doing of the Roman Catholic Church:

But you may read the Bible from Genesis to Revelation, and you will not find a single line authorizing the sanctification of Sunday. The Scriptures enforce the religious observance of Saturday, a day which we never sanctify.

If Protestants would follow the Bible, they should worship God on the Sabbath day by God is Saturday. In keeping the Sunday, they are following a law of the Catholic Church.

Question: Have you any other way of proving the Church has power to institute festivals of precept? 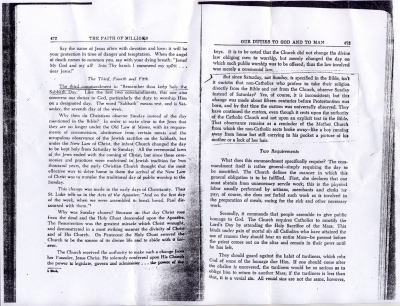 Practically everything Protestants regard as essential or important they have received from the Catholic Church... The Protestant mind does not seem to realize that in accepting the Bible and observing the Sunday, in keeping Christmas and Easter, they are accepting the authority of the spokesman for the church, the Pope.

Thus the observance of Sunday by the Protestants is a homage they pay, in spite of themselves, to the authority of the (Catholic) Church.

The Catholic Church, for over one thousand years before the existence of a Protestant, by virtue of her divine mission, changed the day from Saturday to Sunday...

The Adventists are the only body of Christians with the Bible as their teacher, who can find no warrant in its pages for the change of day from the seventh to the first. Hence their appellation, "Seventh-day Adventists."

It was the holy Catholic Church that changed the day of rest from Saturday to Sunday, the 1st day of the week. And it not only compelled all to keep Sunday, but at the Council of Laodicea, AD 364, anathematized those who kept the Sabbath and urged all persons to labor on the 7th day under penalty of anathema.

I have repeatedly offered $1000 to any one who can furnish any proof from the Bible that Sunday is the day we are bound to keep...The Bible says, “Remember the Sabbath day to keep it holy,” but the Catholic Church says, “No, keep the first day of the week,” and the whole world bows in obedience.

The use of temples, and these dedicated to particular saints, and ornamented on occasions with branches of trees; incense, lamps, and candles; votive offerings on recovery from illness; holy water; asylums; holydays and seasons…are all of pagan origin and sanctified by their adoption into the Church.

The [catholic] Church is above the Bible, and this transference of the Sabbath observance is proof of that fact.

We hold upon this earth the place of God Almighty.

The Pope is of so great dignity and so exalted that he is not a mere man, but as it were God, and the vicar of God.

The letters inscribed in the Pope’s miter are these: VICARIUS FILLII DEI, which is the Latin for, “Vicar of the Son of God.”

Letter from C.F. Thomas, Chancellor of Cardinal Gibbons on October 28, 1895:

Of course the Catholic Church claims that the change was her act…And the act is a MARK of her ecclesiastical power and authority in religious matters.

Sunday...is purely a creation of the Catholic Church.

Sunday...It is a law of the Catholic Church alone...

Not the Creator of the Universe in Genesis 2:1-3, but the Catholic Church “can claim the honor of having granted man a pause to his work every seven days.”

The (Catholic) Church changed the observance of the Sabbath to Sunday by right of the divine, infallible authority given to her by her Founder, Jesus Christ. The Protestant claiming the Bible to be the only guide of faith, has no warrant for observing Sunday. In this matter, the Seventh-day Adventist is the only consistent Protestant.

The Church made a sacred day of Sunday…largely because it was the weekly festival of the sun; for it was a definite Christian policy to take over the pagan festivals endeared to the people by tradition, and to give them a Christian significance.

John A. O'Brien, The Faith of Millions: the Credentials of the Catholic Religion Revised Edition (Our Sunday Visitor Publishing, 1974): 400-401:

But since Saturday, not Sunday, is specified in the Bible, isn't it curious that non-Catholics, who claim to take their religion directly from the Bible and not from the Church, observe Sunday instead of Saturday? Yes, of course, it is inconsistent; but this change was made about fifteen centuries before Protestantism was born, and by that time the custom was universally observed. They have continued the custom even though it rests upon the authority of the Catholic Church and not upon and explicit text in the Bible. That observance remains as a reminder of the Mother Church from which the non-Catholic sects broke away—like a boy running away from home but still carrying in his pocket a picture of his mother or a lock of her hair.

This change from Saturday to Sunday Sabbath was prophesied about in Daniel 7. The great reformer Philipp Melanchton knew this truth five centuries ago. He wrote this:

He changeth the tymes and lawes that any of the sixe worke dayes commanded of God will make them unholy and idle dayes when he lyste, or of their owne holy dayes abolished make worke dayes agen, or when they changed ye Saterday into Sondaye...They have changed God’s lawes and turned them into their owne tradicions to be kept above God’s precepts.ii

The the Mark of the Beast is NOT the same as The Sunday Law that “IDENTIFIES” the 1st Beast of the earth. They are NOT the same item.

The Mark of the Beast will be a “chip” that your particular country will give you to conduct your buying and selling with: As long as you are a good citizen of the State by following all the State’s Rules which include the Sunday Law. Then the State will allow the chip that is already in your Credit Card “now” to operate.

The State will turn off your chip every time you get out of line and don’t follow the State Rules which include SUNday Worship of all peoples having only 1 State Religion in the coming NWO unification of Church and State.

They can turn off your chip whenever they want to,

as this will be a cashless society Worldwide.

Again for clarity re the Mark:

1.) Whether injected (the size of a grain of rice) inside your hand;

2.) Invisible skin coloured tattoo on your forehead, (for facial recognition CAMERAS), or

3.) The chip that is inside your Credit Card right “NOW”.

Some Countries will probably want to use a skin coloured tattoo on your forehead for facial recognition software (because someone could cut a chip out of another’s hand and/or steal another’s Credit Card.

Step by step Satan is setting up this system, as you cannot withdraw large amounts of cash out of your Bank, not pay your Mortgage with cash!

Remember not to get the terms waters (peoples) Beast 1, and the term sea (Mediterranean Sea) Beast 2 confused.

This Article clarifies/unravels the words of Revelations for you, so please consider this.