They are playing you like a fiddle to vote for the Jesuit.

Trump is WORSE than Hitlary, because Trump is a Jesuit who “VOWED” to KILL “ALL” CHRISTIANS.

YOU do “NOT” become part of this evil system by VOTING in it.

There is NO hope, till Christ arrives and smashes Trump and Hitlary.

Donald Trump is “WORSE” than Hitlary,

Donald Trump is a lying Jesuit, just like the Poop is.

Donald Trump took an Oath to become a Jesuit.

His oath that he swore to was to KILL Christians, bash babies heads against the wall, rip the babies out of their mothers’ wombs, strangle poison and stab MURDER Christians.

Hitlary did not take such an evil oath.

Trump will kill Christians “SOONER” than Hitlary will. That is a FACT, because TRUMP TOOK A Jesuit OATH TO “KILL”.

Here is the HIGHLIGHT of the Oath that Trump took:

"I furthermore promise and declare that I will, when opportunity presents, make and wage relentless war, secretly or openly, against all heretics, Protestants and Liberals, as I am directed to do, to extirpate and exterminate them from the face of the whole earth; and that I will spare neither age, sex or condition; and that I will hang, waste, boil, flay, strangle and bury alive these infamous heretics, rip up the stomachs and wombs of their women and crush their infants' heads against the walls, in order to annihilate forever their execrable race. That when the same cannot be done openly, I will secretly use the poisoned cup, the strangulating cord, the steel of the poniard or the leaden bullet, regardless of the honor, rank, dignity, or authority of the person or persons, whatever may be their condition in life, either public or private, as I at any time may be directed so to do by any agent of the Pope or Superior of the Brotherhood of the Holy Faith, of the Society of Jesus." http://www.biblebelievers.org.au/jesuits.htm

Trump is “NOT” a Presbyterian- that is just his phony cover.

Trump is a Jesuit.

Trump was educated by the Fordham Jesuits and even his children all go to the Jesuit University in Georgetown.

leaning to the left, and

ALL MASONIC SYMBOLS for ALLEGIANCE TO SATAN! 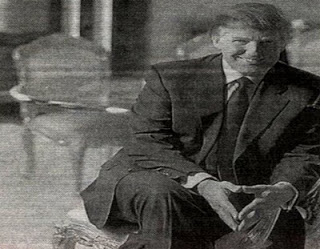 AND watch out because there are trolls on the Internet who are putting up false information to try to cover the truth up.

submitted 1 year ago * by Veritas__Aequitas

Donald Trump has been the subject of media frenzy as of late. It seems that a considerable amount of those who subscribe to alternative sources of information are Trump supporters. They see him as some kind of rebel, going against both the Republican and Democratic parties (as exemplified by his recent non-commitment to support the Republican nominee for President).

Could it be though, that Donald Trump is a "false flag candidate" being used to secure the vote of the ever-increasing independent constituency in order to inevitably lull the US into a false sense of positive political novelty and thus to subsequently impose Jesuitical right-wing fascism leading to a nation-wide race war as devised by the masters of class adversarialism, the Sons of Loyola?

It very well could be. Here is why:

Trump claims to be Presbyterian, yet he attended Jesuit Fordham University for two years and then transferred to the covertly Jesuit-controlled University of Pennsylvania. 1

Court Jew David L. Cohen is the Chairman of the Board of Trustees of the University of Pennsylvania as well as an alumnus of University of Pennsylvania. He is also the executive vice president of Comcast. 5 He was recently named co-chairman of the leadership planning committee of the Roman Catholic World Meeting of Families in Philadelphia (which is the coming of the Pope to Philadelphia!) 6

Protestants do not attend Roman Catholic institutions, especially counter-reformation Jesuit institutions like Fordham University, so Trump is at the very least an apostate for having done that. However, the story does not end with Trump.

There you have it; Trump, in addition to being affiliated with both Jesuit Fordham and covertly Jesuit UPenn, has at least three children who are all alumni of UPenn and notorious Jesuit Georgetown University!

re connected to Rome and all will only serve to implement the tyrannical, neo-Romanist policies of the Papacy and its professed soldiers of the Society of Jesus.

What do Donald Trump, Tim Kaine and Pope Francis have in common?

Answer: all three men were educated by Jesuits, a religious order of Catholic priests whose most famous member is the Pope himself.

“Trump claims to be Presbyterian, yet he attended Jesuit Fordham University for two years and then transferred to the covertly Jesuit-controlled University of Pennsylvania.

Trump attending Fordham University made it clear he was a Jesuit stooge.

To all members of the Offshoot Churches of God:

they are giving/playing the women with Hitlary

giving/playing the white males with Trump.

They’ve got you all suckered.

They are TRICKING you again to vote for the Jesuit “SATANIST” TRUMP.

to vote for a Satanic Jesuit Trump

or vote for a 4th Degree Witch Hitlary.