RIGHT NOW you are being COMMANDED by your Government

that you cannot tell ass fucking homosexuals to repent.

RIGHT NOW you are being COMMANDED

If you are a Christian

You “WILL” be MURDERED IN THE FUTURE

had not worshipped the beast or

[had not worshipped] his image, and

had not received the mark…

and they came to life and reigned with Christ for a thousand years” Revelation 20:4 NAS

Jesus said believers IN God’s Bible words, will be delivered to tribulation and killed.

Christians will be hated by all nations on account of His name  [what His name stands for re what He taught].

Right now today, we witness “more” world-wide torture & brutal murders of Christians because of their faith than any other time in history.

Love for others grows cold.

Warning signs exploding around us.

Satan will bring with him Beast #2, the False Prophet, who will be the Antichrist’s worship leader, whose main purpose is to cause the world to worship Beast #1.

NOW the POOP is promoting a false spirit of “unity” in humanity to ultimately unite and manage by itself, without God. This means they will CONTINUE TO follow their own lusts.

They ARE carrying out Satan’s will and purpose, AND

WE NOW NOW NOW ARE “NOT” ALLOWED to tell homosexuals and lesbians to repent.

The world teeters on the brink of utter ungodliness.

Life under the reign of the Beast HAS already started EVEN THOUGH the final 7 years have not started.

The only thing a servant of God can expect in this time is: 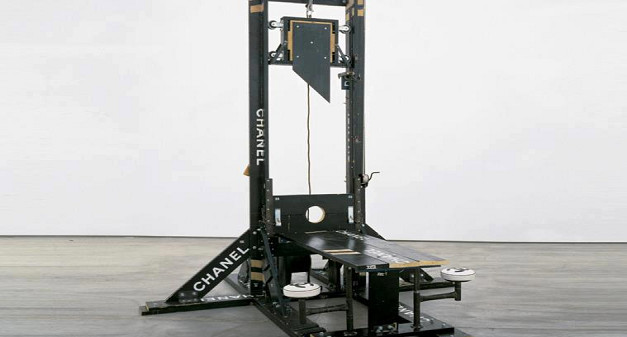 Why Did the U.S. Government Purchase 30,000 Guillotines?

"And I saw thrones, and they sat upon them, and judgment was given unto them: and I saw the souls of

them that were beheaded

for the witness of Jesus, and for the word of God, and which had not worshipped the beast, neither his image, neither had received his mark upon their foreheads, or in their hands; and they lived and reigned with Christ a thousand years." ~ Revelation 20:4

1- 2 Code of Georgia Annotated, relating to the death penalty

1- 3 generally, so as to provide a statement of legislative

1- 5 applicability; to repeal conflicting laws; and for other

1- 8 The General Assembly finds that while prisoners condemned to

1-10 transplant, any such desire is thwarted by the fact that

1-11 electrocution makes all such organs unsuitable for

1-12 transplant. The intent of the General Assembly in enacting

– The use of guillotines for “governmental purposes” was lobbied for and passed in the U.S. Congress

– The information we received is that 15,000 are currently stored in Georgia and 15,000 in Montana

– Are the beheadings by Muslims today meant to condition and desensitize us against U.S. Government beheadings in the future?

If Georgia was planning to utilize guillotines as a method of execution, how could this be carried out without purchasing guillotines?

So you must PREPARE to FLEE the USA, Britain, Canada, Australia, etc.