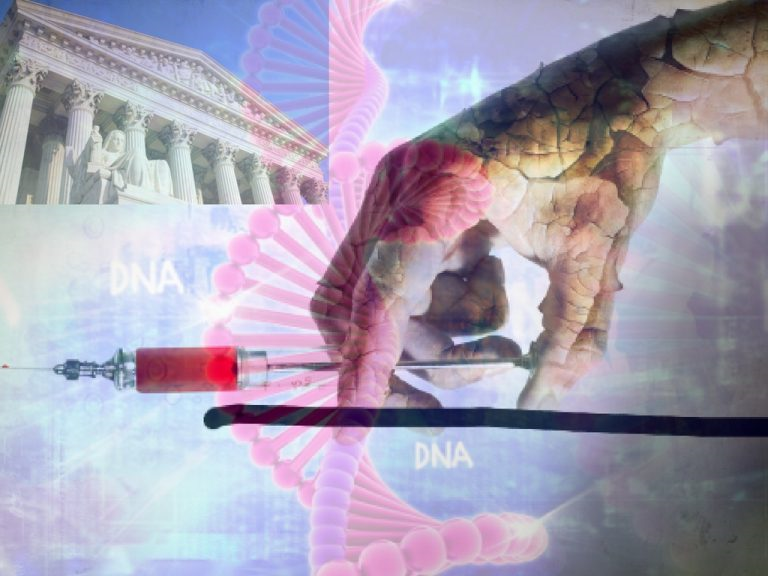 A news story tend to move in waves. It appears, retreats, and then appears in an altered form—replete with lies, cover stories, and embedded confusion. That’s why I’m keeping this story alive in its stark essence—

The reference is the New York Times, 3/9/15, “Protection Without a Vaccine.” It describes the frontier of research. Here are key quotes that illustrate the use of synthetic genes to “protect against disease,” while changing the genetic makeup of humans. This is not science fiction:

“By delivering synthetic genes into the muscles of the [experimental] monkeys, the scientists are essentially re-engineering the animals to resist disease.”

“’The sky’s the limit,’ said Michael Farzan, an immunologist at Scripps and lead author of the new study.”

“The first human trial based on this strategy — called immunoprophylaxis by gene transfer, or I.G.T. — is underway, and several new ones are planned.” [That was nearly two years ago.]

“I.G.T. is altogether different from traditional vaccination. It is instead a form of gene therapy. Scientists isolate the genes that produce powerful antibodies against certain diseases and then synthesize artificial versions. The genes are placed into viruses and injected into human tissue, usually muscle.”

Here is the punchline: “The viruses invade human cells with their DNA payloads, and the synthetic gene is incorporated into the recipient’s own DNA. If all goes well, the new genes instruct the cells to begin manufacturing powerful antibodies.”

“the synthetic gene is

incorporated into the recipient’s own DNA.”

Alteration of the human genetic makeup.

Not just a “visit.” Permanent residence. And once a person’s DNA is changed, doesn’t it follow that he/she will pass on that change to the next generation of children, and so on, down the line?

The Times article taps Dr. David Baltimore for an opinion:

“Still, Dr. Baltimore says that he envisions that some people might be leery of a vaccination strategy that means altering their own DNA, even if it prevents a potentially fatal disease.”

Yes, some people might be leery. If they have two or three working brain cells.

This is genetic roulette with a loaded gun.

And the further implications are clear. Vaccines can be used as a cover for the injections of any and all genes, whose actual purpose is re-engineering humans.

The emergence of this Frankenstein technology is paralleled by a shrill push to mandate vaccines, across the board, for both children and adults. The pressure and propaganda are planet-wide.

If you’re going to alter humans, for example, to make many of them more docile and weak, and some of them stronger, in order to restructure society, you want everyone under the umbrella. No exceptions. No exemptions.

The freedom and the right to refuse vaccines has always been vital. It is more vital than ever now.