Come into the safety and protection of  TO COG The "Obedient" Church of God.
Video Sermon given by Lawrence A. Nowell
Mar 7, 2015
15th Day of God's Twelfth Month, 5775
The Obedient Church of God

Come into the safety and protection of TO COG The"Obedient" Church of God.
Video Sermon given by
Lawrence A. Nowell
Mar 7, 2015
The Obedient Church of God

Sermon Highlights:
Come into the safety and protection of TO COG The"Obedient" Church of God.
Video Sermon given by
Lawrence A. Nowell
Mar 7, 2015

The Obedient Church of God

Your minister is “NOT” your Leader/Head.

“Christ” is your leader, not your Sinister.

Your minister is “NOT” your Leader/Head!

King James Bible
But I would have you know, that the head of every man [Denomination/offshoot COG/minister] is Christ. 1 Corinthians 11:3 and

=Your minister is “NOT” your Head!

God’s Bible’s word IS your Leader/Head.

START OBEYING Yeshua/your Bible/and NOT your DISobedient Sinisters who will DIE in their DISobedience for preaching and practicing lies. Revelations 21:27, 22:15 because your ministers “ALL” DISobey God, as PROVEN by these following FACTS:

2nd Thessalonians 3:16 commands you to “leave” your Sinister because he is deliberately Disobeying God’s Bible. If you do what your Sinister says, and not what Deut 16:16 says, that means you love your Sinister MORE than God. Matthew 10:37.

Do not keep company with your lying Sinister, because he will lie to you and say he is obeying God’s Bible Deuteronomy 16:16 by saying he is having a Service, but he is “NOT” obeying God, because he does not have a Pilgrimage Feast 3 times.

Have nothing to do with him, because he does not obey Deuteronomy 16:16 and have 3 Pilgrimage Feasts a year, like Jesus's Family and the 1st Century Church did. If anyone [minister] comes to your meeting and does not teach the truth 2 John 1:10. Do not associate with them. 2nd Thessalonians 3:14.NET Bible.

5 So they established a decree to make proclamation throughout all Israel, from Beersheba even to Dan, that they should come to keep the Passover unto the LORD God of Israel at Jerusalem: for they had not done it of a long time in such sort as it was written. [15 minutes before the start of the 15th]. 2 Chronicles 12:5.

If Christ used and averaging calendar, then you do not have salvation, because then Christ broke His Father’s Law/command: Lights will mark days of Genesis 1:14.

Read your Bible and see that Genesis 1:14 commands: “Lights will mark days”, “NOT” averaging calendars. WAKE UP and follow God’s Bible. And there is a SABBATH New Month Day every month according to Ezekiel 46:3 and Isaiah 66:23, and as a Sabbath, that is “why” the correct day of rest is so important.

To stop any further arguments, just answer this question: Why would you use an averaging calendar, when with 1 click of the computer you can KNOW the TRUE date of the start of the Year/Month from 2 or more WITNESSES as you are commanded to on the AUTHORITY of 2 or more Witnesses? 1 Timothy 5:19.

Why would you use an averaging calendar when you can know the TRUE DATE? 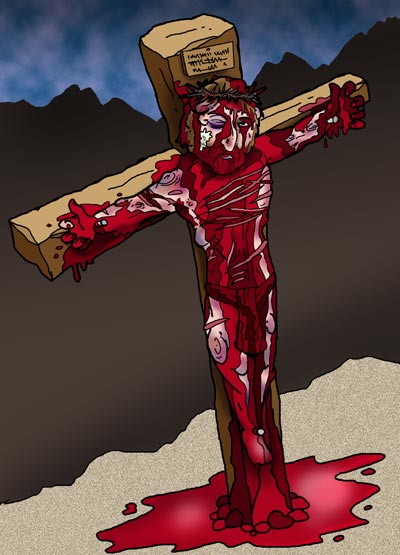 The Last Dinner is “not” the Passover. Do this DINNER MEMORIAL in Remembrance of Me Luke 22:19 as a Tribute DINNER to the Greatest Man.

6.)     You are next 2 days later to then have the Passover on Nisan 14 (the “same” way the Disciples and the 1st Century Church did), at twilight “AFTER” the lambs are killed=just before Nisan 15 starts (not before the lambs are killed as you are wrongly doing now at the start of Nisan 14 instead of correctly at the “end” of Nissan 14). You have Bread and Wine now for protection from the Death Angel=Eternal Death. No Dinner, no Foot Washing, no hymn, on Nisan 14 as GOD’S PASSOVER is TO BE done in haste. That is what your Bible states!

7.) This is how you are to eat it: with your cloak tucked into your belt, your sandals on your feet and your staff in your hand. Eat it in haste; it is the LORD's Passover. Exodus 12:11. As in leaving Egypt, or heading for the airport/Place of Safety= not lollygagging around.

Editor’s Note: Do not focus on yourself when you take the Passover, or you are then taking the Passover in an Unworthy “manner”.

Focus on Yeshua/Christ/Jesus. Unworthy is an adverb as in unworthy manner. Unworthy is NOT a noun therefore it does not refer to the person and furthermore because NO ONE IS WORTHY. Do not let your minister beat you over the head with 1st Corinthians 11:29.

Follow the 2 different 1st Century Church days=2 TIMES you take the Bread and Wine. JUST LIKE THE 1ST Century Church did 2 days/2 times. They set the example of 2 times.

ii.)              Then at the Passover. When you do it “exactly” like the Disciples set the example, you will better understand the events. That is why he said “often”= For as often as ye eat this bread, and drink this cup, ye do shew the Lord's death till he come. 1 Corinthians 11:26. KJV=

11.) You do not want to bring forth the fruit of Repentance. NET Bible. Therefore produce fruit that proves your repentance. Matthew 3:8 Luke 3:8.

15.) STOP following the words of “your” church ministers/sinisters, and start following the Words of God this year of 2015 Red Moon Changes.

1.) True American Flag Shown on screen.
2.) How the Alien Savior (who is a Demon posing as an Alien) will be introduced.

Biblical FACTS brought to you by www.TheWorldTomorrow.org

TO COG (The Obedient Church of God):

A.) Date that John The Baptist started to preach is:

Tiberius started to reign in 14 A.D.

Therefore John The Baptist/Elijah started to preach Repentance and Prepared the way for Yeshua in:

=29 A.D.= is when John the Baptist started preparing the way.

It is a monumental change from B.C. to A.D. and

It is a monumental change from the 1986 to now in 2015 giving the above outlined truths, starting in, and all put together in 2015, to prepare the way for Yeshua.

Therefore 2015 should be a year of change. That is what the Red Moons mean= Change= YOU are to “Change” your above ways.

B.) Repent from your above 8 gross errors for those who perish, because they did not receive the love of the truth so as to be saved. 2 Thessalonians 2:10. This is SERIOUS. TAKE THIS SERIOUSLY you ministers AND REPENT.

Your very eternal life is at stake.

C.) You teachers/ministers will be judged more strictly James 3:10.

E.) Cursed is he [the minister] who does the work of the Lord deceitfully. Jeremiah 48:10. By lying/inferring that he has 3 Pilgrimage Feasts, the same as the Feast of Tabernacles, when he does NOT! Your minister does NOT follow God’s Bible Deuteronomy 16:16- 3 Pilgrimage Feasts of the Bible, and he also refuses to follow Ezekiel 46:3 which states you “Shall” have a Worship Service every New Month Day. Isaiah 66:23 will FORCE anyone who is still alive to have New Month Day.

Members can’t know the Bible truth because ministers are manipulating and DESTROYING and hiding the Bibles words, as proven by the above facts.

The ministers only allow you to listen to “their” channel, preventing everyone from really understanding the “BIBLE’S” CHANNEL.

You the ministers are only ½ full of oil-only ½ obedient to God.

Causing the members to be all BLIND to GOD’S Bible commands per the above.

Editor’s Note: In the land of the blind, a 1 eyed man/minister is King.

In the land of the Blind a 1 eyed = ½ obedient ½ full of oil minister is King.

But a 2 eyed speaker who sees more truths in God’s Bible, is ignored.

The memberships of the offshoot WCG (Worldwide Churches of God) MUST be allowed to PRACTICE God’s Ways that are in GOD’S BIBLE, which means:

Focus on Yeshua/Christ/Jesus’s being whipped more than any man was and focus on his bleeding to death as a lamb. Isaiah 52:14 Holman Christian Standard Bible
Just as many were appalled at You-- His appearance was so disfigured that He did not look like a man, and His form did not resemble a human being—That is what=who you focus on.

Unworthy is an adverb= as in unworthy manner. Unworthy is NOT a noun therefore it does not refer to the person and furthermore because NO ONE IS WORTHY to take the Passover. Do not let your minister beat you over the head with 1st Corinthians 11:29, because that takes your mind away from Christ which “CAUSES” you to take the Passover in an Unworthy manner. Focus on Jesus’s shed blood, him bleeding to death because you are unworthy, but He loved you.

F.) Now for you ministers: Into Hell you go, for all being lying ministers, who disobey the clear words of God’s Bible. Galatians 1:6 states that if you ministers preach anything different than what is in God’s Bible, then you are ACCURSED.

So CHANGE “NOW” you ministers and members in 2015, before it's too late! The end of days now draws neigh! Prepare ye the way of Yeshua. Isaiah 40:3.

Get rid of the Leaven “before” the Days of Unleavened Bread. Stop paying the Trashmasters/sinisters who trash God’s Bible commands

By ministers breaking the above 8 Commands of GOD.

You are to grow in Grace (a limited time to repent in) and Knowledge, and not be stuck into 1972 not having grown in Grace and Knowledge for 43 years!

We TO COG (The Obedient Church of God) are continuing the Work of Restoring all things that Mr. Armstrong started. We are restoring what he did not restore. Father did not give Mr. Armstrong everything, or else we could not grow in Grace (repentance) and Knowledge.

But grow in the grace and knowledge of our Lord and Savior Jesus Christ 2 Peter 3:18 ESV.

And since you “know” that your minister is DISobeying God, AS PROVEN BY THE ABOVE “FACTS”

He who has an ear, let him hear what the Spirit says to the churches.' New American Standard Bible Revelations 2:29.

Repent BEFORE he arrives.

He died for you. The least you can do is:

He stands at the door knocking, listen to what God’s Bible states= NOT what your minister says. Prepare ye the way of the Lord, make straight his paths. Mark 1:3.
Yet if thou warn the wicked, and he turn not from his wickedness, nor from his wicked way, he shall die in his iniquity; but thou hast delivered thy soul. Ezekiel 3:19

And again for clarity:

In the land of the blind, a 1 eyed minister (who is only ½ full of obedience/oil) is King.

But a 2 eyed preacher who sees every word and follows God’s every jot in God’s Bible is ignored!

(Ignored since 1979 and when I told WCG they should NOT have a Cornucopia on their stage).

When members wake up to follow their Bible, then the 1 eyed sinisters/ministers only ½ full of oil, won’t have power anymore to deceive you into DISobeying God’s above 7 Bible truths.

26 If we deliberately keep on sinning after we have received the knowledge of the truth, no sacrifice for sins is left, 27 but only a fearful expectation of judgment and of raging fire that will consume the enemies of God. Hebrews 10:26.