The Six Stages of Religious Persecution

...The following plan...Monsignor Charles Pope along with Johnette Benkovic developed a systematic theory of religious persecution. Both men point out, that the persecution of a targeted faction of society begins slowly and incrementally increases stage by stage. According to this theory, American Christians should be very cognizant that they are well into the first stages of extreme religious persecution which is sponsored by the Obama administration.

Stage one commences with attempts to stereotype the targeted group. In the aforementioned paragraphs, it is quite clear that Obama views Christians with disdain. After all, Obama announced that America is no longer a Christian nation. Also, in 2008, he categorized working-class voters in the following way: “It’s not surprising, then, that they get bitter, they cling to guns or religion or antipathy to people who aren’t like them or anti-immigrant sentiment or anti-trade sentiment as a way to explain their frustrations.”

According to the Obama/Clinton Cartel’s world view, people of faith are the inhibitors of “progress,” and they deserve being described as Bible-thumpers, and therefore ignorant, intolerant followers of Jesus Christ. With Carlin’s proclamations, our Christian views will soon come under extreme attack.

The second stage of persecution involves justifying hatred of a particular group. Just as soon as Carlin’s DOJ domestic terrorism task force swings into action, Christians will receive the terrorist label that the Obama administration believes that they so badly deserve. It is interesting the Carlin’s forces have partnered with the SPLC. They are so radical and so violent that even the FBI stopped using them as a source of information.

Stage three involves the marginalizing of Christians’ role in society. This is what Hitler did to the Jews as he first denied them employment in key areas of banking and education. It is at this time that every wrong act committed by a Christian will be highly vilified and publicized. It will be at this point that astute and aware Christians will be forced to go underground to practice their faith. With the church increasingly following under the domination of the Clergy Response Team, in which your pastor is an employee of the Department of Homeland Security, the church could soon be an unsafe place for Bible-believing Christians. Oh, there will still be churches, just not any churches that we would recognized as being Christian. I firmly believe that Carlin’s task force will usher in the first three stages of this approach to Christian persecution as he will do Clinton’s dirty work if she is elected. .
The fourth stage of Christian persecution involves criminalizing Christians and their churches, businesses, and educational institutions. Christians will be held up as the model for what is wrong with America with its intolerance for the free expression of every deviant lifestyle and social expression of sinful behavior. Hillary Clinton, who recently stated at the Sixth annual Women in the World Summit that “deep-seated cultural codes, religious beliefs and structural biases have to be changed” for the sake of giving women access to “reproductive health care and safe childbirth.

Stage six ushers in the direct persecution of Christians. The time for marginalizing Christians stops and the outright, undeniable persecution begins. Churches will be forced to marry gays and will be forced to formally accept the validity of the teaching of every other religion (e.g. Islam), or be found guilty of a hate crime. Pope notes,

even jail time for Christians is quite possible: “Already in Canada and in parts of Europe, Catholic clergy have been arrested and charged with ‘hate crimes’ for preaching Catholic doctrine on homosexual activity.” Stage six will mark the beginning of the elimination of Christianity as a mainstream, viable religion.

Open Doors stated that Christians are the most persecuted religious group worldwide. An average of at least 180 Christians around the world are killed each month for their faith. 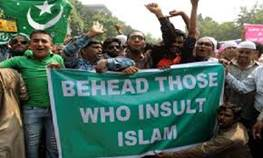 Is this religious tolerance?

The United States Department of State stated that Christians in more than 60 countries face persecution from their governments or surrounding neighbors simply because of their belief in Christ.

Open Doors also stated that in 41 of the 50 worst nations for persecution, Christians are being persecuted by Islamic extremists. As previously noted by this author, the Obama administration is filled with high ranking government employees who have ties to the terrorist group known as the Muslim Brotherhood.

What Is a Good Christian to Do?

Under the coming edicts of Carlin, Christians will soon be faced with a choice between giving in, to standing up for one’s beliefs and be “fed to the lions”, or, to take their religious practices underground. Going underground seems to be the wisest of all choices. However, how far behind can the Mark of the Beast be?

Hillary Clinton may not be the anti-Christ, but she is certainly the set up figure for his appearance. If she is elected, Christians, everywhere, would have wished they worked harder to keep her from the White House.