Since we the United States, are so against Terrorism, I suggest we start a Corporation like “Toys Are US”

but instead call it “Terrorists Are US” and

2.) Then let’s go into Afghanistan and kill ½ a million people.

3.) Then let’s go into Libya and kill ¼ million people.

Hummmmmmm... we’re running out of people to kill and countries to destroy. So let’s go into Syria and see how many we can kill in Syria, after all Assad must be a bad guy, so we should kill at least a million of his people like we did to Saddam/Iraq, Afghanistan and Libya, because Saddam was a bad guy, but oops he wasn’t because he didn’t have any weapons of mass destruction that 16 of our lying intelligence alphabet soup agencies LIED about non-existent Weapons of Mass Destruction and said that he had Weapons of Mass Destruction.

Ra, Ra, Ra, “TERRORISTS ARE US”, but we’ve already destroyed Iraq, so we’ll have to find another country to destroy.

Ok, then let’s try the babies thing in Syria, ‘cause it worked before to trick the USA sheeple. So let’s have Trump say on Apr 7, 2017 ... "When you kill innocent children, innocent babies — babies, little babies — with a chemical gas that is so lethal," Trump said during a joint ...

Yeah let’s now go into Syria now and see how many we can kill in Syria because Assad must be a bad guy even though his people elected him and love him via an election run Jun 4, 2014 ... Assad captures another seven-year term after winning almost 90% of people’s vote...  But let’s LIE and say the people hate him and that he is bombing the people that love him, and then we can go into Syria like we did in Iraq and Afghanistan and Libya and kill MILLIONS.

All we have to do is daily on the Lamestream News like NBC, ABC, Fox, CNN etc. is repeat the lie over and over again that Assad is bombing his people.

Until the American sheeple believe the lie.

Even though Assad is bombing the rebels and ASSAD IS “NOT NOT NOT” BOMBING HIS OWN PEOPLE. Assad loves his people and is fighting against the rebels on behalf of his people.

Yup, that will give us war mongers of the Corporation of the United States more money from war and we can shoot off another 59 missiles

at $1.5 million $ a missile= over $100 Million Dollar profit for the war mongers but $100 Million+ Dollars cost for the American Sheeple:

For hitting an empty airport that we gave 2 hours advance warning to Russia and China that we are going to strike that “particular” empty Syrian airport with missiles. Missiles that only 23 of 59 hit the hangers, with 36 of the missiles being duds and falling elsewhere in the desert. But we war mongers got our $100 Million+ Dollars from the American taxpayer. Yea, “Terrorists Are Us”. Ra, Ra, Ra we made more money for the war mongers who have “continual wars” year after year, with it now being 16 years of war. The war in Afghanistan followed the 2001 United States invasion of Afghanistan.

Later we can flatten Damascus into a pile of rubble.. Ra, Ra, Ra, that’s right: “Terrorists Are Us” alright. PROVEN by the FACTS.

Our leaders including Trump are SATANISTS. Trump worships Apollo the Sun God, and Trumps 66th floor is filled with Sun God artifacts.

Here is Bush casting a satanic spell on the United States Twin Towers. Having the children chanting: Kite MUST HIT Steel (Kite is a military term for Plane). https://www.youtube.com/watch?v=RKgBHnD03so with Bush holding Baphomet 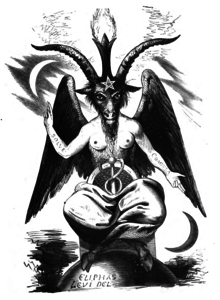 The Pet Goat Book upside down.

The Pet Goat-Bush read it to second graders instead of responding to 9/11 and sits around to cast a spell against America: 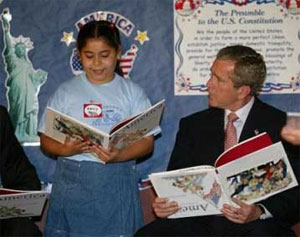 The book shown in this photograph is America: A Patriotic Primer, by Lynne Cheney, wife of Vice-President Dick Cheney. Upside-down so that he could cast THE satanic spell every “WITCH” WAY. He did that on purpose. You see his grandfather was Allister Crowley a well-known Satanist. Satanists always use reverse symbolism.
He is reading a banned book that uses ritualistic undertones dedicated to a Satanist entity called ‘Pan’. The words from the book were chanted to the innocent children “WHILE” the inside job-attacks on the Twin Towers were taking place. It was a mega -ritual and BUSH not only was PART OF IT, Bush is a Kabballah Satanist and Bush was casting a spell using the children as pawns in the spell.

Yep, TERRORISTS ARE US as proven by the FACTS.

And Trump is just as bad, as Trump is a 33rd Degree Mason that worships LUCIFER as all Masons do. 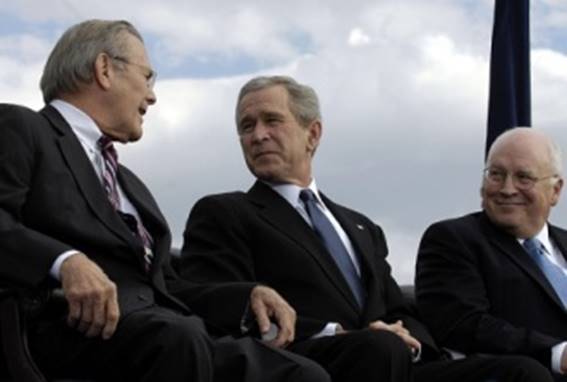 In what is the first ever conviction of its kind anywhere in the world, the former US President and seven key members of his administration were yesterday (Fri) found guilty of war crimes.

The trial held in Kuala Lumpur heard harrowing witness accounts from victims of torture who suffered at the hands of US soldiers and contractors in Iraq and Afghanistan.

They included testimony from British man Moazzam Begg, an ex-Guantanamo detainee and Iraqi woman Jameelah Abbas Hameedi who was tortured in the notorious Abu Ghraib prison.

At the end of the week-long hearing, the five-panel tribunal unanimously delivered guilty verdicts against Bush, Cheney, Rumsfeld and their key legal advisors who were all convicted as war criminals for torture and cruel, inhumane and degrading treatment.

Full transcripts of the charges, witness statements and other relevant material will now be sent to the Chief Prosecutor of the International Criminal Court, as well as the United Nations and the Security Council.

The Kuala Lumpur War Crimes Commission is also asking that the names of Bush, Cheney, Rumsfeld, Gonzales, Yoo, Bybee, Addington and Haynes be entered and included in the Commission’s Register of War Criminals for public record.

The tribunal is the initiative of Malaysia’s retired Prime Minister Mahathir Mohamad, who staunchly opposed the American-led invasion of Iraq in 2003.

He sat through the entire hearing as it took personal statements and testimonies of three witnesses namely Abbas Abid, Moazzam Begg and Jameelah Hameedi. The tribunal also heard two other Statutory Declarations of Iraqi citizen Ali Shalal and Rahul Ahmed, another British citizen.

After the guilty verdict reached by five senior judges was delivered, Mahathir Mohamad said: “Powerful countries are getting away with murder.”

War crimes expert and lawyer Francis Boyle, professor of international law at the University of Illinois College of Law in America, was part of the prosecution team.

After the case he said: “This is the first conviction of these people anywhere in the world.”

While the hearing is regarded by some as being purely symbolic, human rights activist Boyle said he was hopeful that Bush and Co could soon find themselves facing similar trials elsewhere in the world.

“We tried three times to get Bush in Canada but were thwarted by the Canadian Government, then we scared Bush out of going to Switzerland. The Spanish attempt failed because of the government there and the same happened in Germany.”

Boyle then referenced the Nuremberg Charter which was used as the format for the tribunal when asked about the credibility of the initiative in Malaysia. He quoted: “Leaders, organizers, instigators and accomplices participating in the formulation or execution of a common plan or conspiracy to commit war crimes are responsible for all acts performed by any person in execution of such a plan.”

The US is subject to customary international law and to the Principles of the Nuremberg Charter said Boyle who also believes the week-long trial was “almost certainly” being monitored closely by both Pentagon and White House officials.

Professor Gurdial Singh Nijar, who headed the prosecution said: “The tribunal was very careful to adhere scrupulously to the regulations drawn up by the Nuremberg courts and the International Criminal Courts”.

He added that he was optimistic the tribunal would be followed up elsewhere in the world where “countries have a duty to try war criminals” and he cited the case of the former Chilean dictator Augustine Pinochet who was arrested in Britain to be extradited to Spain on charges of war crimes.

“Pinochet was only eight years out of his presidency when that happened.”

The Pinochet case was the first time that several European judges applied the principle of universal jurisdiction, declaring themselves competent to judge crimes committed by former heads of state, despite local amnesty laws.

Throughout the week the tribunal was packed with legal experts and law students as witnesses gave testimony and then cross examination by the defense led by lawyer Jason Kay Kit Leon.

The court heard how

The witnesses also detailed how they have residual injuries till today.

Moazzam Begg, now working as a director for the London-based human rights group Cageprisoners said he was delighted with the verdict, but added: “When people talk about Nuremberg you have to remember those tried were all prosecuted after the war.

The prosecution case rested on proving how the decision-makers at the highest level President Bush, Vice-President Cheney, Secretary of Defence Rumsfeld, aided and abetted by the lawyers and the other commanders and CIA officials – all acted in concert. Torture was systematically applied and became an accepted norm.

According to the prosecution, the testimony of all the witnesses exposed a sustained perpetration of brutal, barbaric, cruel and dehumanising course of conduct against them.

These acts of crimes were applied cumulatively to inflict the worst possible pain and suffering, said lawyers.

The president of the tribunal Tan Sri Dato Lamin bin Haji Mohd Yunus Lamin, found that the prosecution had established beyond a “reasonable doubt that the accused persons, former President George Bush and his co-conspirators engaged in a web of instructions, memos, directives, legal advice and action that established a common plan and purpose, joint enterprise and/or conspiracy to commit the crimes of Torture and War Crimes, including and not limited to a common plan and purpose to commit the following crimes in relation to the “War on Terror” and the wars launched by the U.S. and others in Afghanistan and Iraq.”

President Lamin told a packed courtroom: “As a tribunal of conscience, the Tribunal is fully aware that its verdict is merely declaratory in nature. The tribunal has no power of enforcement, no power to impose any custodial sentence on any one or more of the 8 convicted persons. What we can do, under Article 31 of Chapter VI of Part 2 of the Charter is to recommend to the Kuala Lumpur War Crimes Commission to submit this finding of conviction by the Tribunal, together with a record of these proceedings, to the Chief Prosecutor of the International Criminal Court, as well as the United Nations and the Security Council.

“The Tribunal also recommends to the Kuala Lumpur War Crimes Commission that the names of all the 8 convicted persons be entered and included in the Commission’s Register of War Criminals and be publicized accordingly.

“The Tribunal recommends to the War Crimes Commission to give the widest international publicity to this conviction and grant of reparations, as these are universal crimes for which there is a responsibility upon nations to institute prosecutions if any of these Accused persons may enter their jurisdictions”.

It wasn’t Assad that killed MILLIONS in Iraq, Afghanistan and Libya

And DESTROYED Iraq, Afghanistan, and Libya!

It was the USA

“NOW” we are about TO DESTROY Syria.

General Wesley Clark reported in 2012 plans to use the 2001 attacks as a justification to invade seven countries in five years.

The following countries in red have “already” been thrown into utter chaos by USA interference and direct wars:

7 Countries the USA has planned to destroy! Including Syria.

To clear the way for the New World Order.

not Assad who loves his people!

Assad does not bomb his own people. Saying he does is continuing the Lamestream Media lie.